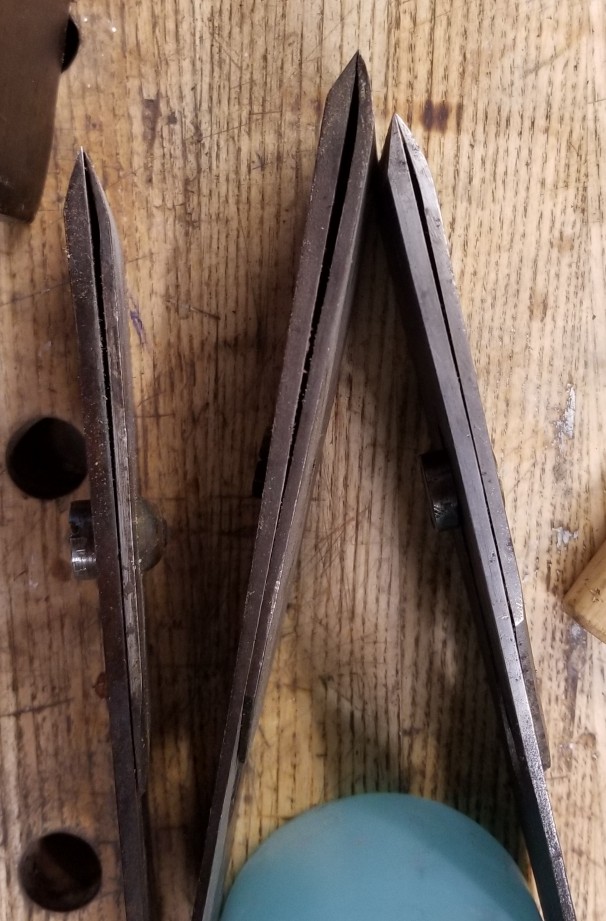 from imgur - same picture.
* Left is the thinnest cap iron and shallowest behind the initial bevel
* center is the butcher cap (the tallest/most bold behind the bevel)
* right is the ibbotson cap in the Nelson (my oldest double iron plane) plane.

I definitely have had older double irons, including second irons made of wrought with a bit, but they were also all very flat.

The very rounded profile of the butcher is also undesirable because it requires a greater wear angle. One can't just open the mouth of the plane because the wear angle is off and it will still jam until the mouth is garishly large - the fix is to increase the wear an appreciable amount - probably 5 degrees. I'm not making planes for sale and am an idealist about the wear and don't particularly like that fact when coupled with being able to feel that it's causing more work.

I have noticed this with stanley branded cap irons, too - some of them have a fatter rounder hump, and some are flatter. While I mentioned that the off brand types that are too flat fail to seal properly, I can feel the ones that are too steep with planing resistance - the engagement is too particular and it's no good once you're already spoiled, so I've generally left those on planes I use the least.

Again, the averge person would notice the difference if I allowed them to use my tools in situ and compare one to the other. The plane is literally harder to push for the same level of tearout control, and I'm no fan. This also caused me to pose the idea of teflon on the cap, which bill pointed out was stupid. I haven't tried it yet, but I'll bet bill is right.

Rafael is the only person who has been in my shop in person (my mess of a shop) and I think it's fair to say that he thinks I may be a little bit nuts in terms of preparation of these little bits (and sole flattening, etc), but it all leads to less effort and the same or better result at the same time. I'm way into that!! into it enough to forge chisels that have a biting edge strength with much less resistance to abrasion when sharpening.

Re: picture database not working..

Beautiful—template quality! *NM*
boy is that not easy to get a picture of.. *PIC*

Re: pictures of effect...

Re: boy is that not easy to get a picture of..

That would make sense..