I think this is hard to judge, for two reasons. One is that we don't always have the same natural stones that were used historically. Andre Roubo was complaining about the declining quality of Turkey stones available 250 years ago. We might be looking at stuff that was second quality in the 16th century.

The other thing is that it is hard to get the most out of a stone without considerable experience. I would not expect to get near the performance that Tim Zowada gets from a coticule. His surface with slurry is rougher than 8000 grit and his surface without slurry (same stone) is finer than 30,000 Shapton. 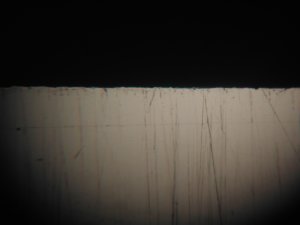 4. Natural stones (both oil and water) are pressure sensitive in a way that synthetics are not.

The King waterstones are pressure sensitive. They can cut faster or slower depending on touch. At one time this quality was considered important.

5. Abrading an oilstone does not have a significant detrimental effect on the edge.

I have certainly seen surfaces that were made with edges from abraded translucent stones that were not as good as what I was getting with a soft Arkansas. There are an awful lot of factors to sort out. Again, skill is a big factor.

A question about all the sharpened edge pictures

Re: A question about all the sharpened edge pictur
Re: Lots…

pretty much covers it...
Some notes *PIC*

Re: The experience factor

What the curators say vs. what they do

Re: What the curators say vs. what they do

I've been there four times...

I'm sort of in the cants?

The name is supposed to be yucky!!