Derek Cohen (in Perth, Australia)
It's been at least a month since I managed time on the Lingerie Chest. Found some time today. It seems to take forever to get the rhythm back.

We left off last time with the sliding mortice sockets installed. These had been built in one section (a "fillet" - I did not know what else to call it), which was split into two parts, one for the rear and another for the front of the carcase. This was to ensure that they were both parallel and coplanar in this curved sided chest ...

The front and rear drawer blades were fitted ... 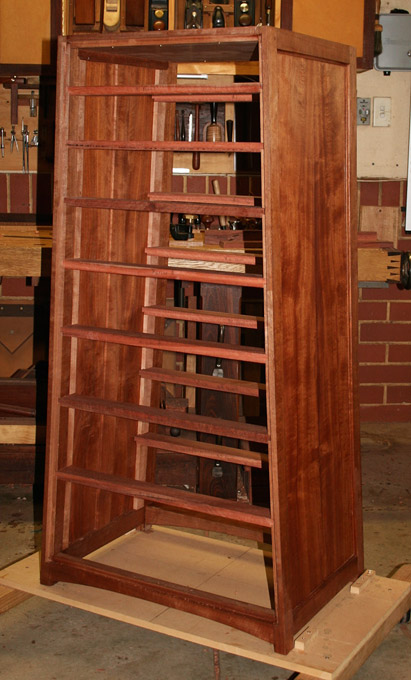 Today every was removed ..

The first task was to ensure that there were no sections of the fillet that were higher than the sides of the carcase (otherwise the drawers would not be flush with the sides). These were pared down ..

The dovetails in the fillets needed to be extended into the sides of the carcase ...

... by 20mm (this will leave space for a 22mm thick drawer front and a shadow front edge). The fillets were glued onto the panel - any movement in the floating panel will be towards the rear, and allowance for this is made in that area. The extention of the sliding dovetails would solidify the structure at the front ...

The sides of the sockets were saw, first with a dozuki and then extended a little deeper with an azebiki.

The ends were drilled to depth ..

.. and then pared out. The sides of the sockets became handy guides to maintain angles ..

Now that that front and rear drawer blades were in their correct positions, the side drawer runners needed to be made.

The drawer blades were morticed and the runners received tenons ..

In fitting them, the front blades were first inserted (from the inside), and the runners fitted (the picture below is taken from the rear of the chest) ..

The rear blade could then be attached. The photo below is taken from the front of the chest. The lower two drawer blades and runners are filled (dry so far) ..

Note that the drawer fronts are bowed, and bowed filler sections are yet to be added to the front drawer blades.

And the last photo before I close up for next weekend ...