Derek Cohen (in Perth, Australia)
I never used the term "curved". I think most would agree that my comments were specific to bow fronts.

You are correct, Bill. My mind is focussed on "curved" and off on a slight tangent. My apology.

It doesn't matter if the bowed front is a single drawer, or two, or many. The common veneered approach is the same. Veneer the whole drawer front and cut it into as many pieces as there are drawers across. Trivial to do if the drawer back is left orthogonal to the ends until just before the drawer box is glued together, at which point the back is sawed to match the bow of the front.

I understand that your comments are aimed at others (who may build something similar), and not at myself. My comments below are just to explain my reasoning for my method, and not to disagree with you.

I did not want to veneer the drawer front - I've done that with several bow front tables - as then there is the need to additionally veneer of the top of the drawer. This makes for more tasks. Plus there is the side to disguise as I want the drawers to end up looking like "traditional" drawers.

What could have been a better alternate approach would be to laminate curved sections, and cut them up to make the drawers. I discarded that for myself at the start because I did not have the equipment to do reliable laminations (in regard to springback).

Someone suggested that I use thick sections of walnut, cut the dovetails, plant the sides, and then shape the drawer front. This, however, would require very thick sections - far thicker than anything I had, and a waste of much timber in the cutting. Here is a diagram ... 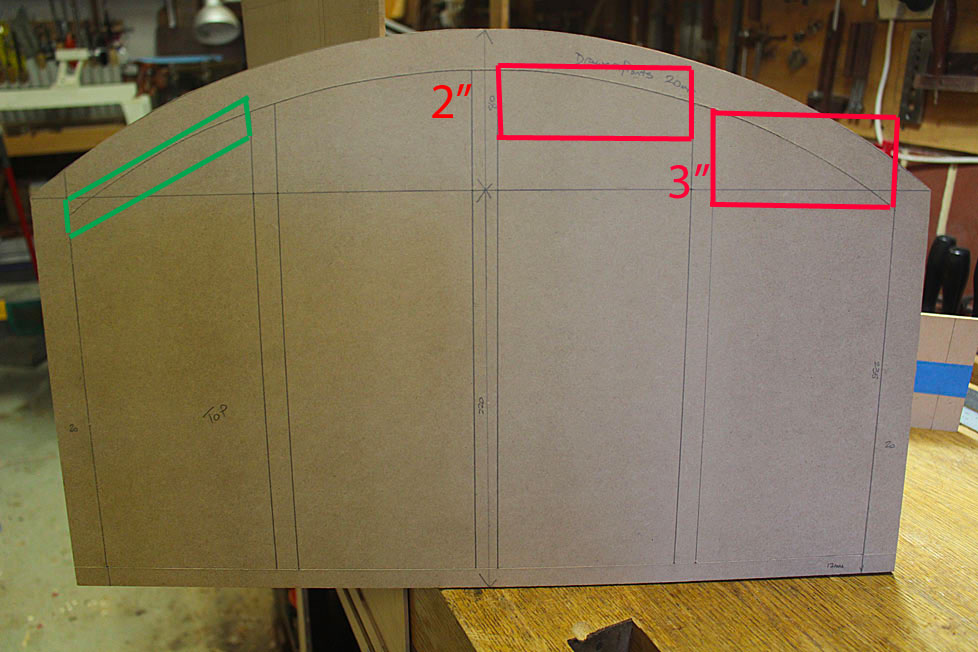 By orientating the boards and using my, admittedly, complex dovetailing method, I get away with drawer front blanks of 1" thickness. These will end up around 3/4" thick once shaped.

The other issue with using thick boards is the grain run out, which would be very noticeable. With the boards orientated as I have, the run out should be minimal.

I remember Jeff Headley warning me to not mess with the drawer back until all the joinery and fitting was complete. The multitude of reasons become apparent when building the drawer.

I agree. That is my strategy. I leave the backs until the sides have been dovetailed at the front. They are then to be cut to length, removed and dovetailed to the backs.

Dovetailing on an angle

not an equivalent example

Re: not an equivalent example

not to be picky, but

Re: not to be picky, but

Re: not to be picky, but

The topic is bow front drawers

Re: The topic is bow front drawers