Derek Cohen (in Perth, Australia)
Mallets and plane hammers are relatively easy to make, and often one of the first tools made by many starting out. But what makes for a good chisel hammer? I have seen some woodworkers wacking a chisel with a lump of wood. Some prefer a claw hammer.

Once upon a time I purchased a plane hammer with a head made of brass and Cocobolo. It had a long, narrow and straight handle, which stayed in my hand as long as I gripped it tightly. The Cocobolo head cracked, and the hammer went to live on a shelf.

A few weeks ago I resurrected this hammer, replacing the Cocobolo with UHMW, and fitting a new handle. This hammer is now my go-to for wood handled chisels which are not reinforced by a hoop, when chopping dovetails. It has inspired me to comment on what I look for when making a chisel hammer. This is the hammer ... 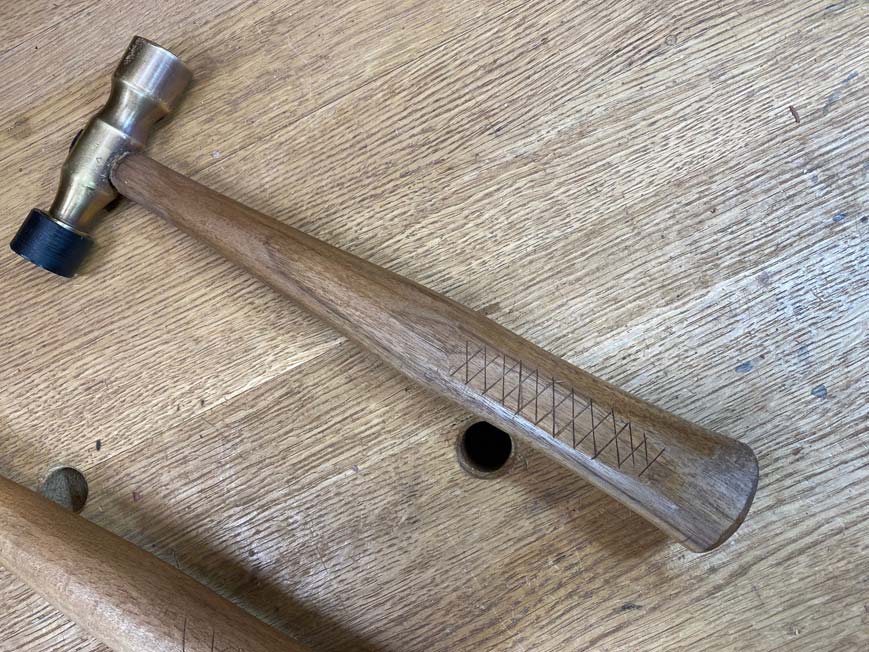 I love UHMW and use it on most of my chisel hammers. It is elastic enough to avoid damaging any wooden surface, but hard enough to offer good feedback. It is available in the form of cutting boards, and I have some from salvage yards. This head was turned on my wood lathe ... 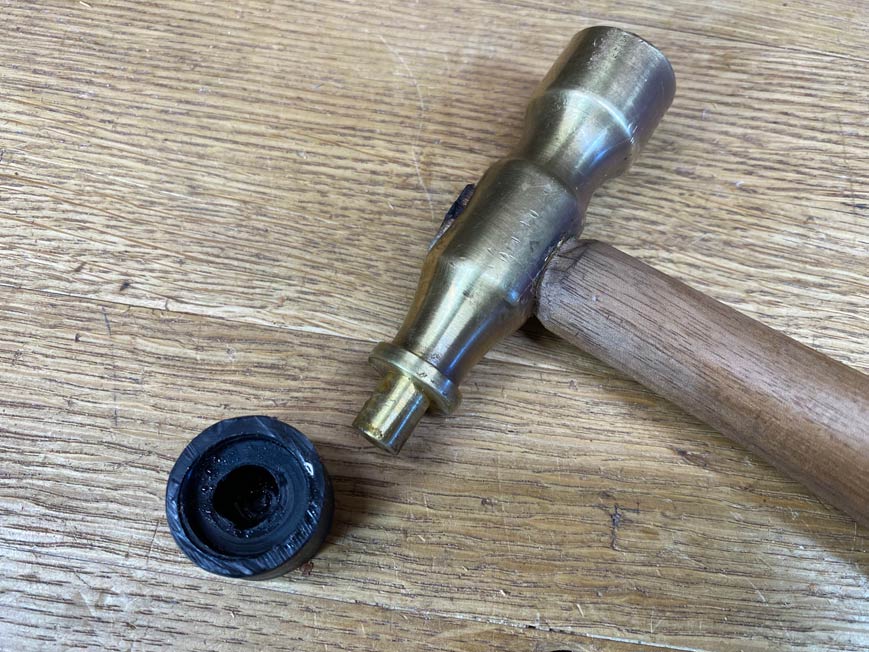 The Black Walnut handle was rough turned on a lathe, and then shaped with a drawknife and spokeshave. The end weight was 12oz/350g.

The handle needs to be seen in three-dimensions. It is oval as well as recessed to fit a hand. The recess prevents the hammer flying off into outer space, while the oval makes it fit the hand. 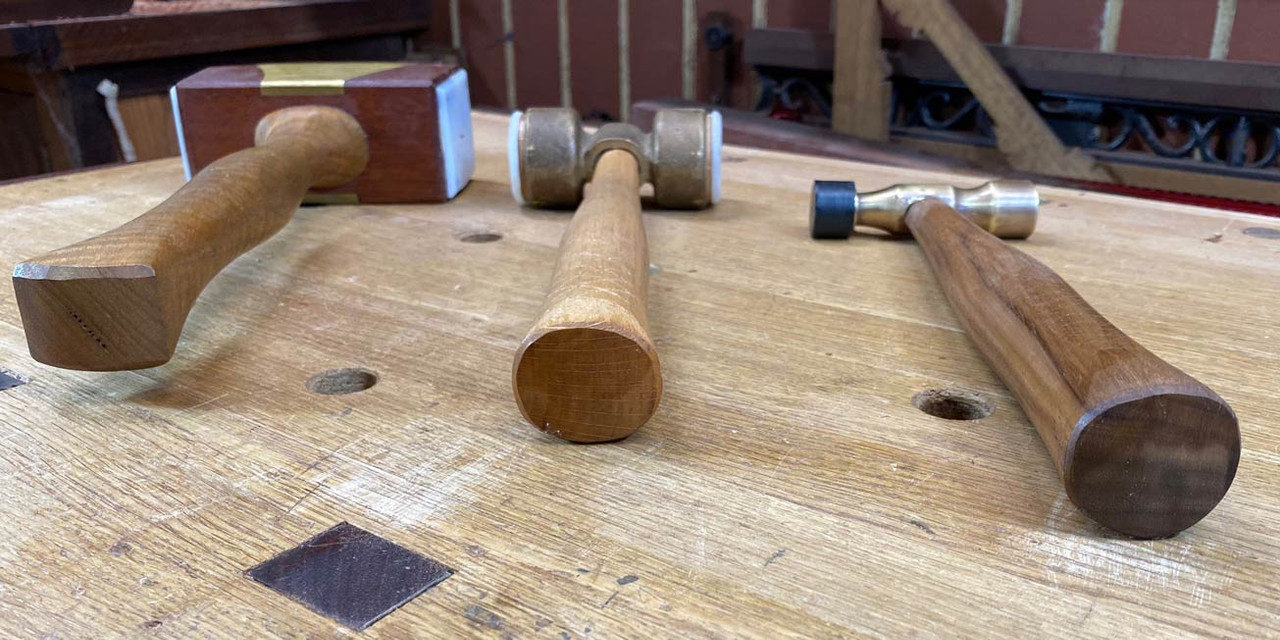 The length of the handle is the third dimension - the shorter, the less impact; the longer, the greater impact. 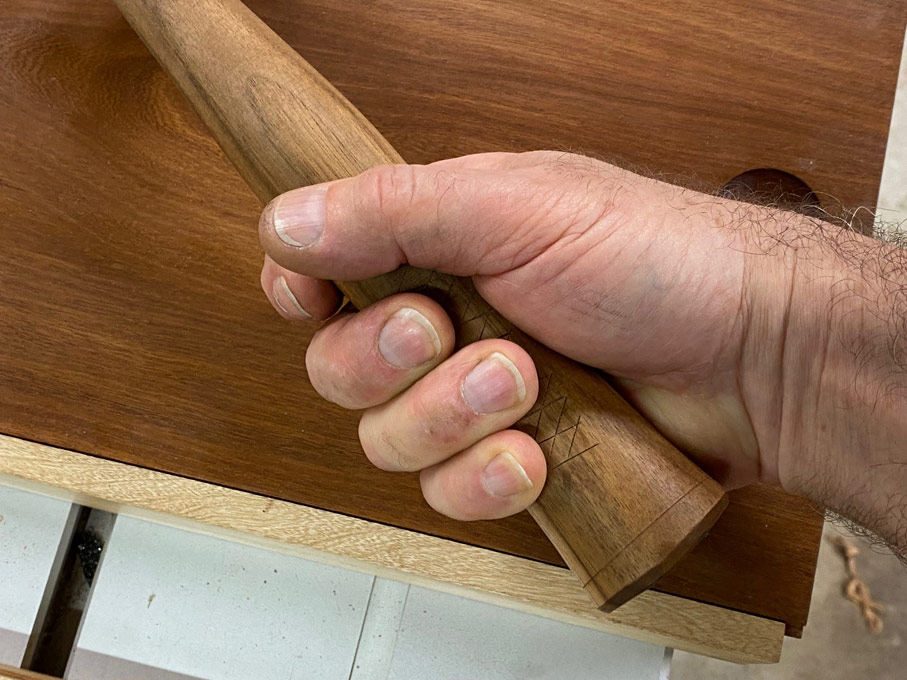 A really heavy hammer such as the one on the left (38oz/1070g) is intended for morticing into hard wood. Thus has a double recess and allows it to be used in a choked position. I rarely use this hammer now days as it it simply too heavy.

It has been replaced by the middle hammer ... 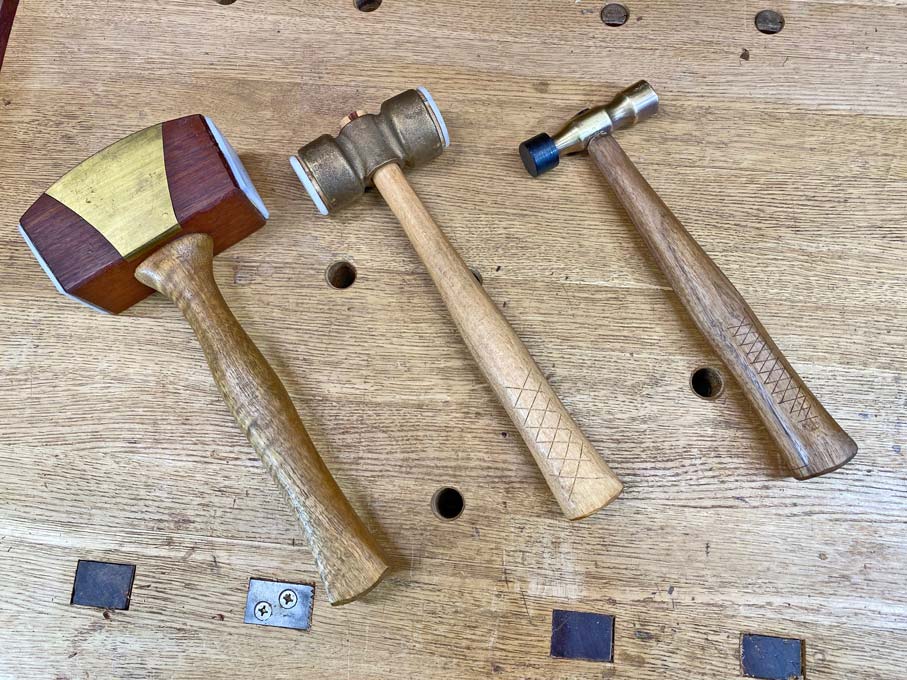 This began life as the Veritas Cabinetmaker's Mallet. UHMW was added to the faces (epoxy and nails, for those asking), and a new handle made from Hard Maple. The brass head helps it reach 23oz/655g. This is a great hammer for morticing.

Fruit woods make good handles. Avoid run out, look for long grain. Some of the worst handles I have had are hardwoods, such as Jarrah - just to brittle with its short grain.

There is no doubt that a small and heavy head has advantages over another hammer which weighs as much but has a large head. Further, my preference is a flat face, rather than the rounded edge of a carver's mallet. I know some prefer the latter, but in my experience it waste energy and requires more care to avoid a glancing blow. The large mallet, above, was styled after a traditional joiner's mallet, and the head weight increased with brass infill. The aim was to find a way to increase weight in a smaller head. In the end it just was too heavy. One does not need to apply brute force.

I believe that the ultimate expression of the chisel hammer is the Japanese gennou. These are designed for working with hooped Japanese bench butt chisels, or oire nomi. I have two, one 13oz/370g and the other 16oz/450g. 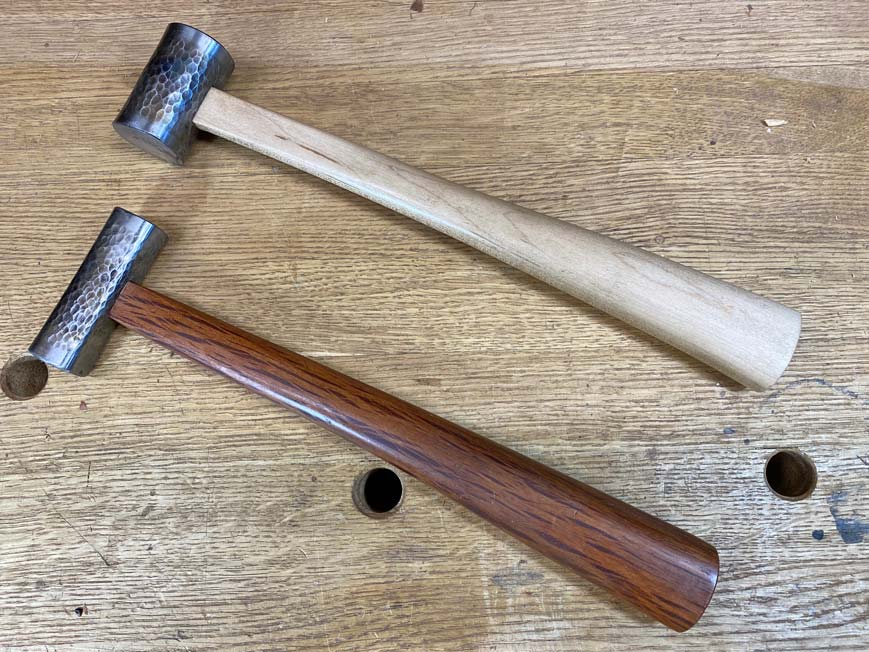 The heads are hardened steel on the outside with softer steel internally to act as a shock absorber. These were made by Tenryuu.

I shaped these handles in a traditional style. They curve as well as taper. This is not as clear in this photo, but more so in the last picture. The curve influences the striking angle and the taper safeguards the grip. 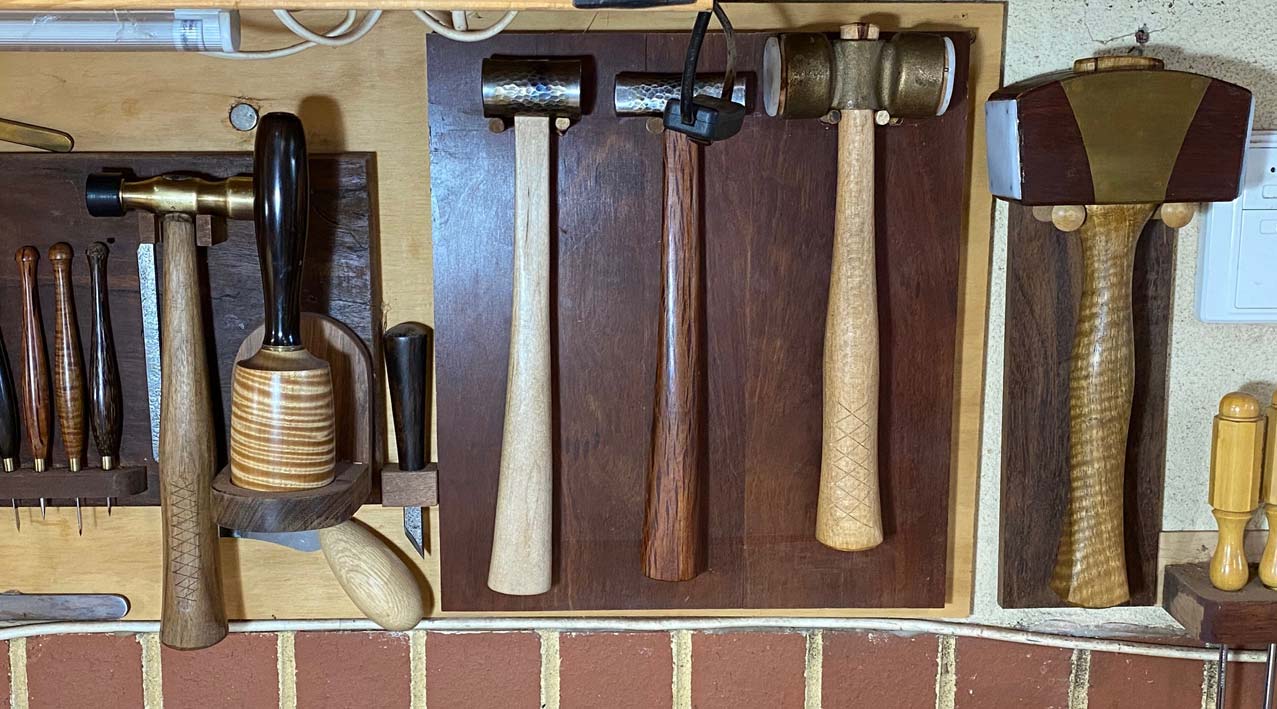 
Messages In This Thread
Please read Terms of Use before posting
Hand Tools is maintained by Administrator
Powered by PerlB v3.2

Copyright © 1998-2022 by Ellis Walentine. All rights reserved.
No parts of this web site may be reproduced in any form or by any means without the written permission of the publisher.