David Weaver
I've thrown away a lot of files and O1 offcuts over the years, but now the addition of the heavier grinders makes it fairly easy to hammer the junk laying around and then grind a knife profile to test edge qualities (and stones on them).

The only issue with the files is that I don't know what all of them are and I think the more premium files (the black diamonds and such) probably won't be that great to make tools out of as they seem to air harden some with grinding and that leads to more heat which seems to lead to a crappy result. Not a huge deal on chisels so If I come across one that's not thin and flat, I'll still try filing a chisel out of one.

I made two mules over the weekend, one out of an O1 sliver without hammering (which should be fine, but the edge runs parallel to the grain - a knife person wouldn't have much regard for it, as it shouldn't do very well in torture tests). The other was an upper level metal file (i cut the tang off and can't remember the brand). That file seemed to air harden on the belt grinder (which I guess is reasonable as I wasn't dipping it and the thin cross section of a knife bevel can cool quickly - not likely full hardening, but partial. And this file then quickly exhausted the zirconia belt that came with my belt grinder attachment).

I forgot to take a picture of the first sharpening attempts - it ended up (the file mule, which was hammered also) with big voids along the edge and pocks up the bevel. Similar to what happens with some PM steels (SGPS does this). Except in this case, the steel was amenable to the washita, it just means extra time getting things prepared for the buffer. It wasn't, for some reason, tolerant of a fine india or a synthetic waterstone. That likely means it'll do a crap job of holding a fine edge in use. I'll track it over time.

This is the file mule after the washita with a razor style into the edge hone and no stropping. 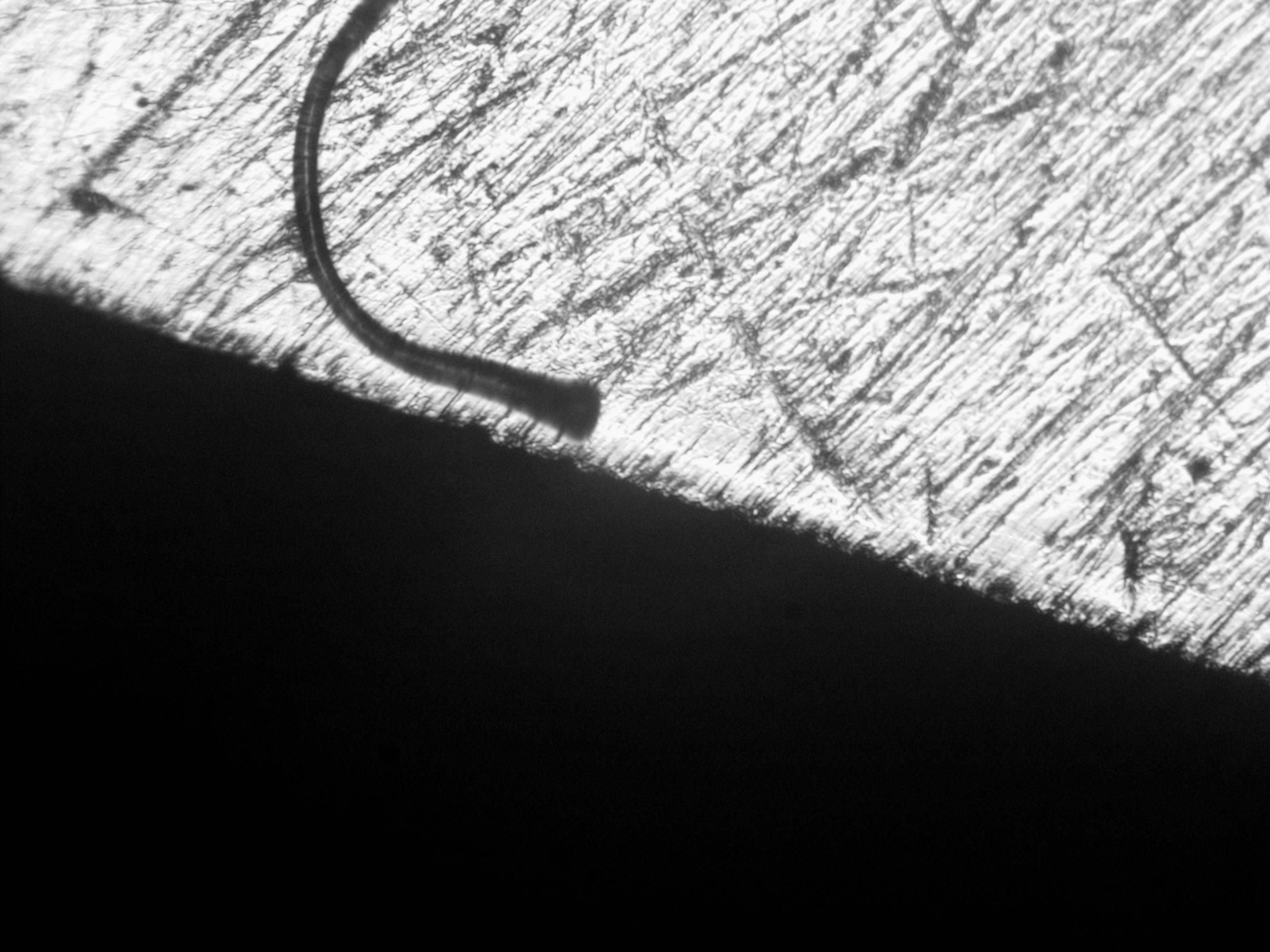 And then this is the same knife after a two step buffing routine ending with 0.3 micron linde a compound.

Looks dreamy, but the total bevel angle just at the tip from both sides is blunt as we're used to with unicorn, while at the same time having a crisper apex than can be obtained by hand.

I doubt it will hold up well, but a regular supply of boxes will see if it's at least up to reasonable wear slicing.

I forgot to take a picture of the polished O1 mule, but it provided an opportunity to look at the effect of oil on a 5k-ish very soft japanese waterstone. I have no before picture on water, but would note that this stone is less fine than the 8k waterstone pictured in the omnibus and leaves a dull finish. With oil, it's flipped around -bright polish and a very good finish off of the stone with no stropping. 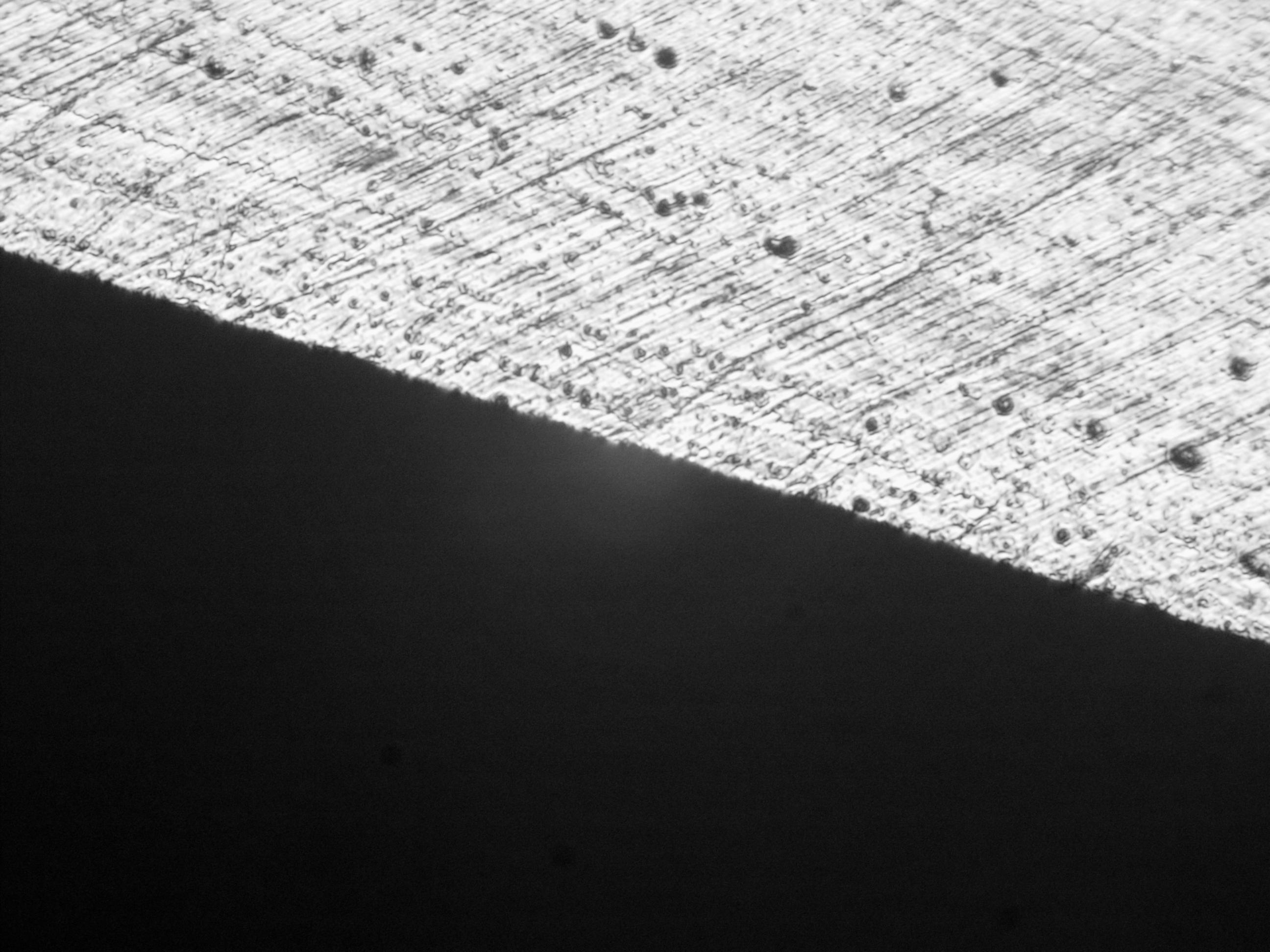 The dots on this are just oil. You have to wipe something oiled about 10 times on clean sections of cloth just to get to this point, which is an illustration of why oil seems to protect tools so well in the short term even after you wipe off any amount that would foul your woodworking.

The objective of mules is to experiment without spending much time and avoid doing something stupid on nicer work. IT also allows me to see exaggerated warpage (the file mule blade warped a bit out of straight on quench).

The amount of heat that the belt grinder can create is something I haven't run into when making chisels so far as they're just filed to shape. They're so quick to file that there's almost no time saved doing the rough work on a chisel with the belt grinder and then finishing everything to better aesthetics with a file. But filing knives by hand without making specialty fixtures for each is a real pain (they're too flexible).

While these mules expose issues (especially because i'm grinding them very thin and then heat treating them thin rather than fat and subsequent finish grinding after heat), they are still useful when done - even the ones that aren't great turn out better than most commercial marking knives.

Re: File and O1 mules

Re: A hand print