TomD
I bought a Barr back when he was only making them for log work, but he made a size he called carving.

When my sister was young she refused to play with her doll called Chatty Baby, because she correctly surmised that the speech giving pull cord would some day break. My mother got her to cut the cord, so that it would be broken from that point on and she could enjoy it. I had the same thing with the best drawknife I own, it is cracked in the metal off the handle. It shows signs of having been beaten into service as a froe. Rather than use it till it did break, or do a risky repair, I bought the Barr, which is the nearest thing to it that I have found.

The main issue is what kind of drawknife do you want. I like the ones that have a crossection like the wing of a plane (a bit like the head of and axe viewed from above). But also popular are one that have a simple chisel grind, like a power jointer knife.

I once saw a display of all the broad axes that Gransford makes, there were 7 of them (at least those were the ones they had on display at the Cottage Show). There seems to be something like that with handles on drawknives, because one can get the blade one likes but the handles are set to use the bevel up or down, etc...

But the Barr works for me. Like the others who have responded, the best ones come from antiques, if you can find one, and they are, or were, a lot cheaper. I bought my Barr around 2002 and the steel was relatively soft. That is not a big deal with most wood I would drawknife. He was also experimenting with things like cryo, so he has probably optimized his tempering at this point. 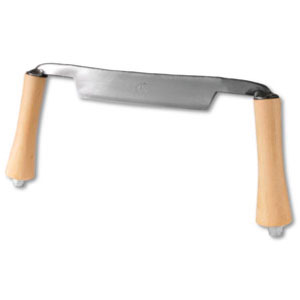