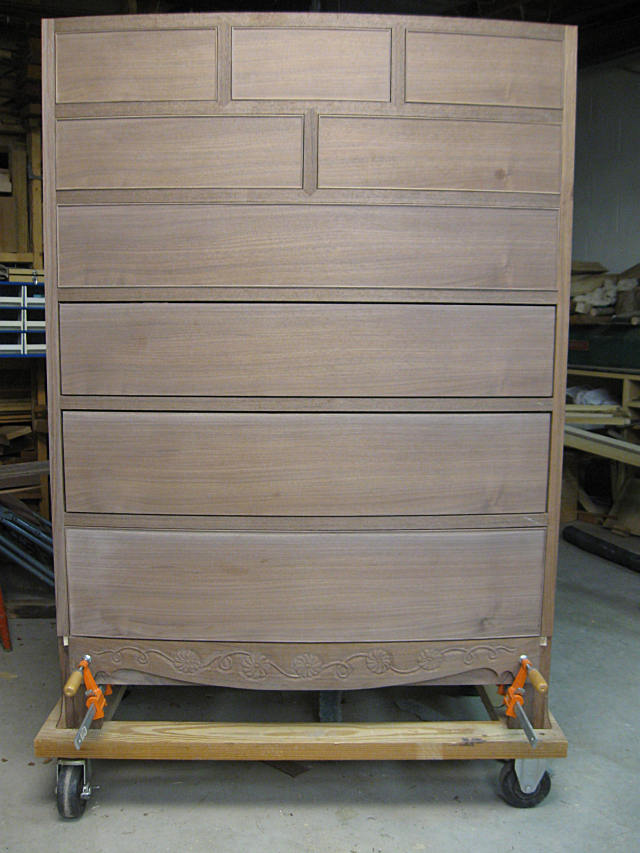 I spare no effort to pick drawer fronts and sides that are complimentary of the piece and each other. I will commonly inspect 500 bdft of lumber to choose the show wood for a case piece. Wouldn’t everyone? Well, apparently not.

Warren, below, spoke of Period case pieces being made with figured, if not knotty, wood for drawer fronts and plain sides. This choice was claimed to be Period Fashion. This statement perked my curiosity. I have a book of Period Chester County furniture and another of furniture of the Connecticut Valley. Also have a copy of Sack but the pictures are too crappy to tell much of the lumber used. The MESDA book has both city and country southern pieces. Curiously, Greene County in eastern TN was a furniture making center in the 1800’s and I have seen some of this furniture.

As Warren described, the first picture shows a walnut piece with highly figured drawer fronts and plain sides. There are large knots in drawers 6, 7 and 8 and figure to be found around large knots or crotch elsewhere. Curiously, the lumber used does not seem to be from sequential boards. The drawers seem to be made from random pieces of knotty or figured near-knot lumber. Were they having a sale of rejects at the mill?

The piece in picture 2 has some of everything in the drawers-drawers 6 and 7 have large knots, yet other drawers are plain knot and figure-free.

Picture 3 shows a piece with plain sides and a variety of appearance on the front-knots, figure, plain.

The desk introduces a new theme, knotty sides and figured fronts that with the exception of drawer 3 have patterns that attractively go together.

In stark contrast to these pieces, the Chester County curly maple furniture I found pictures of were all fashioned from clear lumber, for example the piece in picture 5. Ditto for the cherry furniture. And with one exception the drawers decorated with inlay were not figured.

It would appear in some cases that material for drawer fronts was chosen to display garish figure, knots and all, and this fashion, if it was that, persisted from colonial times to 1850, the cut off for pictures in my book. I have seen the same in furniture from Greene County, TN and furniture in the MESDA compilation. In other cases it looks like drawers were assembled from whatever was available and fit.
All of the 200 or more pictures of furniture I found in the Connecticut Valley book were made of clear lumber. The Mesda furniture I have pictures of ranges from knot-free, to knotty and figured pieces like the Chester County furniture. The knotty ones were made in rural counties.

We rightly complain about the quality of lumber today but it is not hard to find lumber more defect-free than what I observed in the rural walnut furniture. Yet the rural maple and cherry furniture is knot-free in every case I found. It is hard to know what drove the decisions of what wood to use, and where, in the Chester County furniture and that in the MESDA collection from rural counties. However, there is a strong correlation of knots and rural. One has to wonder in Chester County and elsewhere, where was all the clear walnut used? Maybe by the 1800’s all the virgin walnut was gone. Were they harvesting yard trees that had been grown for nuts? Did the clear lumber go to the cities. Speculation of course.

And why does it appear that little thought went into drawer front selection, as evidenced by the pictures shown? Or not. Maybe customers liked the random bold patters that were created. But then why mix in plain? Given the care I, as well as others, use for lumber selection, it is curious. Perhaps in cases they used what they had on hand when an order came it.

It's a gigantic blank..

Re: It's a gigantic blank..

Re: Wood selection for Period drawer fronts
some data to test hypotheses *PIC*

And some very interesting data

Re: And some very interesting data *PIC*

Re: some data to test hypotheses

I don't understand your point