Subject:
Adventure with a Guitar and French Polish

So, I've been on a tear in the last couple of years buying and selling guitars, pretty much breaking even but trying anything and everything that I might like to build.

I know it will generate some heat when I say this - I've been through about 100 guitars in that time, and have built 5 so far, and am looking to ramp up the build numbers once I get a few household demands out of the way. I'm willing to admit I would much rather do things like make chess pieces and make guitars than any furniture (add in a few tools and pencils).

At any rate, one thing I found is that certain guitars are cheap in japan relative to the US and you can get out from under them when you're done looking at them with no problem, and sometimes make up for a little bit of the losses on others. But, my proxy shipper has gone south and went from using guitar boxes to using boxes that are either too big or too little.

I found this out by getting one guitar in a giant box (which cost a $400 shipping upcharge due to its size) and another in a box that was too short - exactly the length of the guitar. Predictable results. This guitar neck is laminated maple - it must've hit hard. a traditional mahogany les paul would've broken clean (which wouldn't have been any better or worse, but it could've broken less neatly if it did that and continued to take abuse). 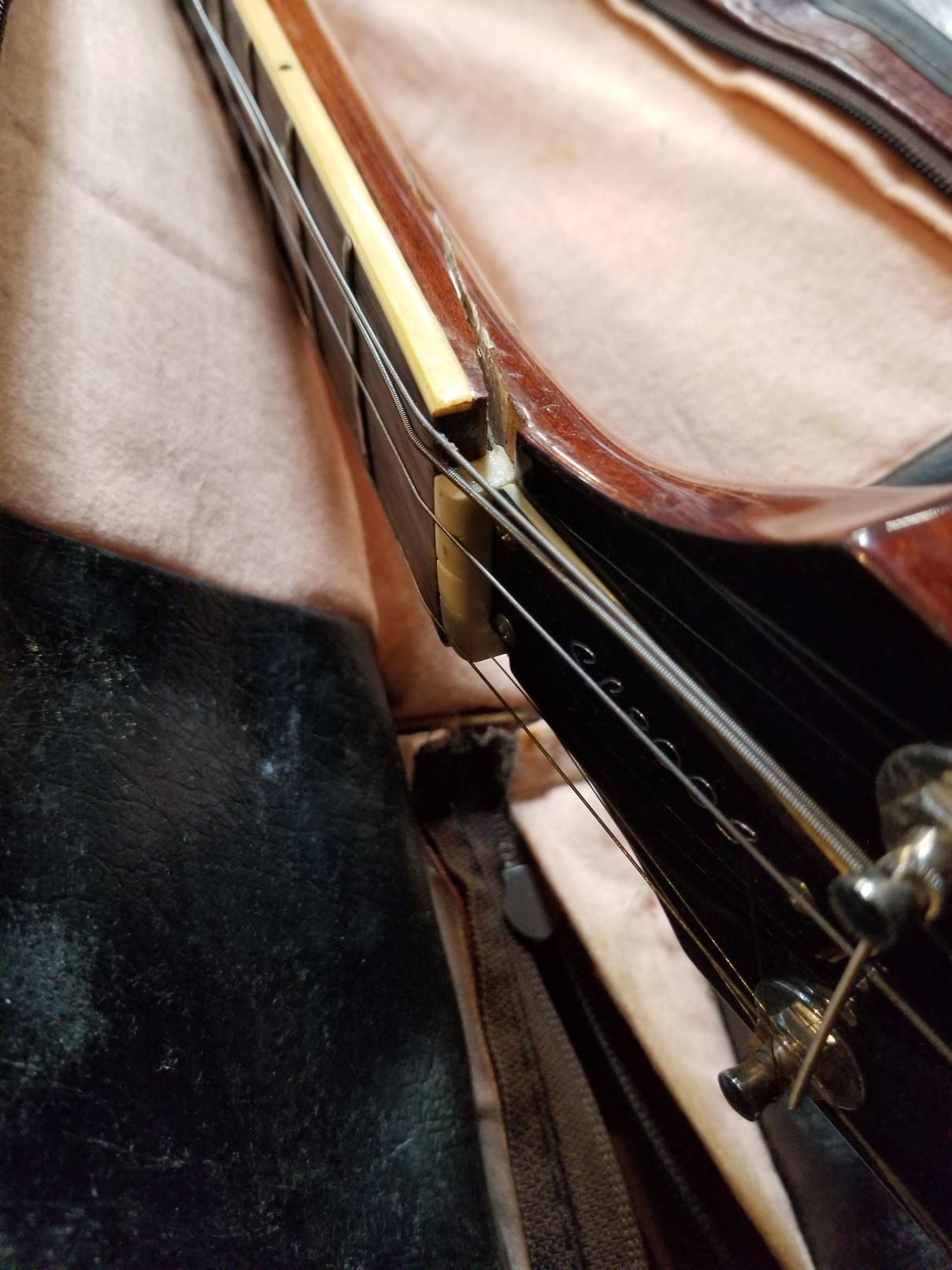 finish on these older guitars (1980 or so is when this one was made) in japan was usually polyurethane. I think this may have been salvageable with clear shellac, but I saw an opportunity to have a sheer neck finish. When I dribbled shellac into the finish crack that was left, the line didn't completely disappear and I wasn't look to experiment to be left with a gloss sticky neck finish. Modern repair with this is CA systems, which seems lowbrow - I don't need to sniff it and have no interest in belaboring repair on a guitar that's not not really worth very much. 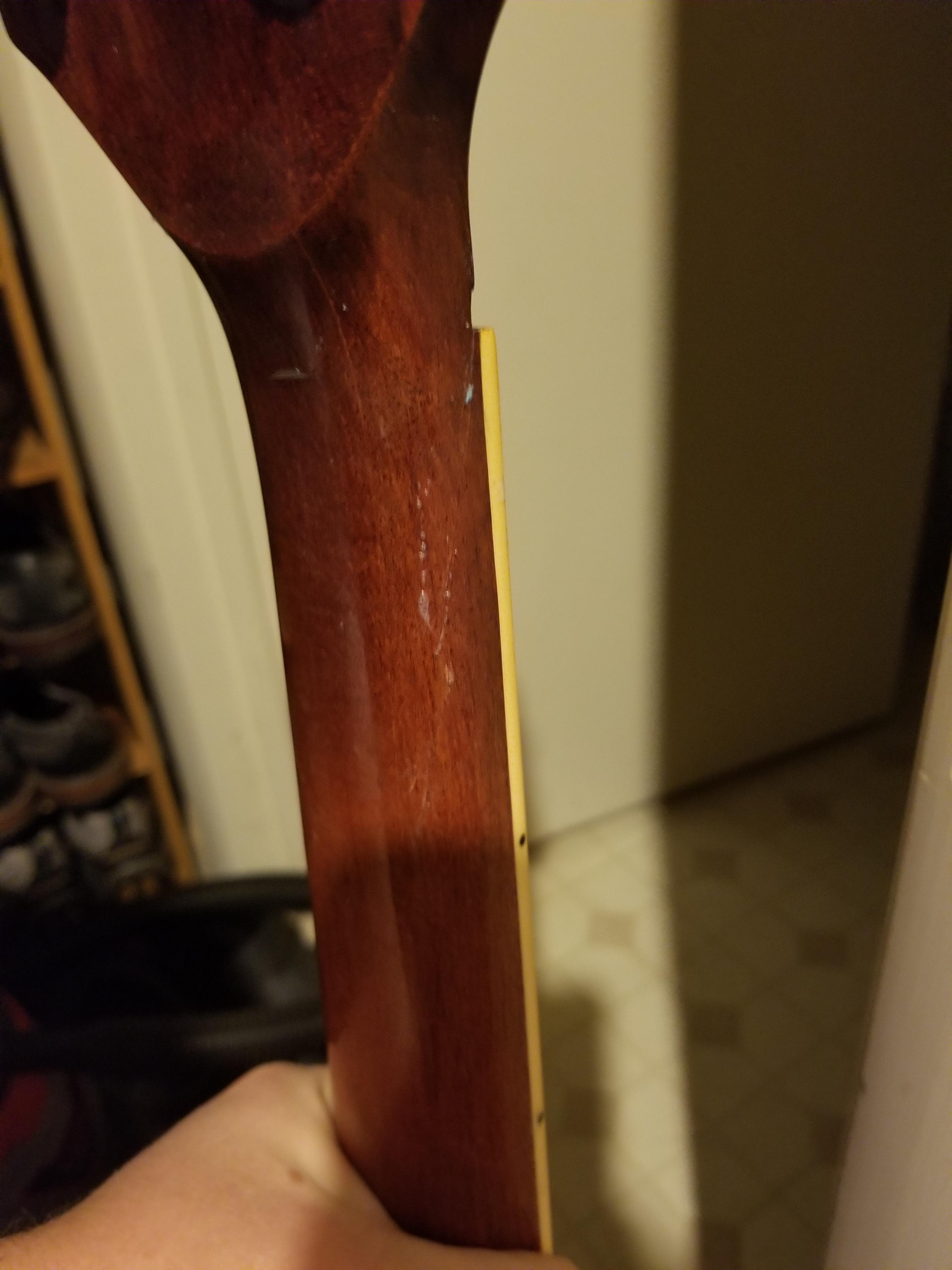 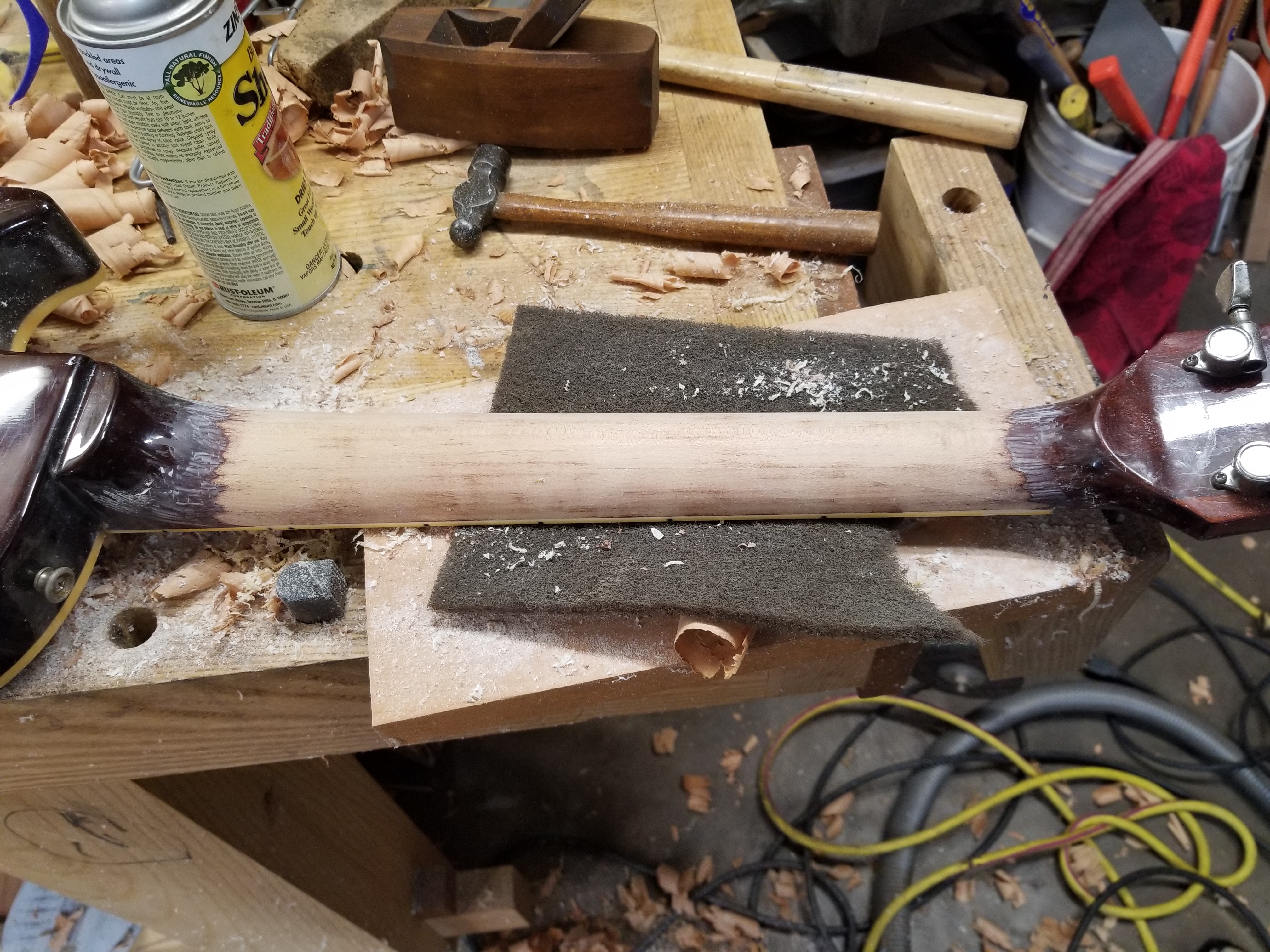 So, I glued it together, and allowed french polish to fill in any bits of the crack that weren't perfect. Knowing that you can use oil in the process, I figured I'd help cover evidence of the crack by adding a brown stain (better to mismatch a lot than a little) as the oil in the process. I *think* this left behind the pigment, but most of the oil ended up on the surface of the guitar neck and got wiped off. 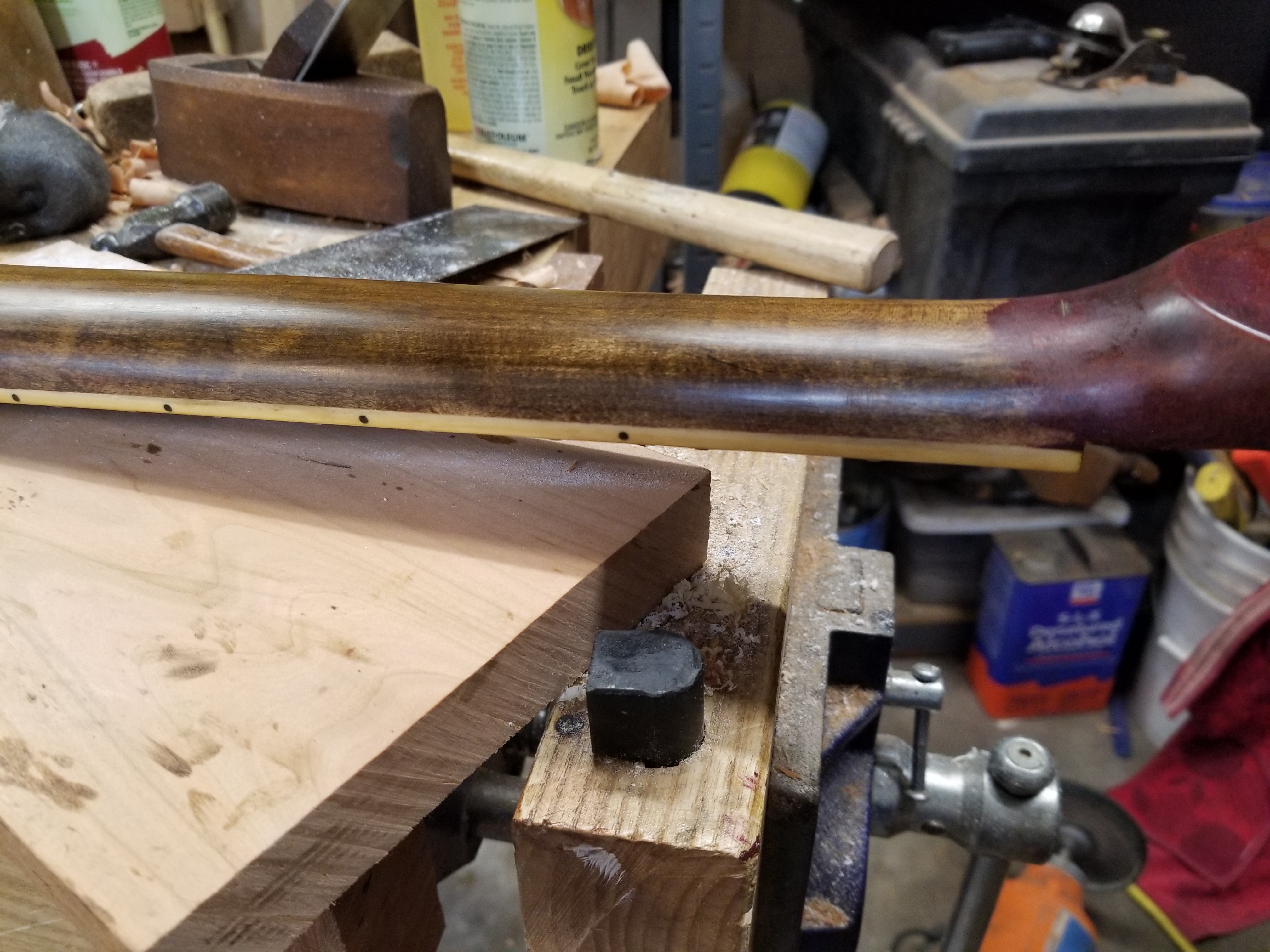 The result is sublime feeling compared to lacquer or polyurethane and the neck was ready for playing within an hour or two. The fact that stain and poly (oil based) doesn't dry quickly doesn't really matter. I thought there may be adhesion issues, but I could just scrape it off and redo if there were any. There aren't really any, though I did push it a little bit and pull off some of the shellac at the heel when I was adding alcohol and moving around the shellac. Not enough to redo anything, especially on a guitar that essentially had no value at the start.

total repair time including gluing, scraping and refinishing was a little over an hour. Use of the french polish process allowed darkening the neck, and doing the finish work on a bench that wasn't even cleaned off, and left behind a dry neck that you could touch at the end of the process (so I could pick the guitar up, and just set it aside for a couple of hours). 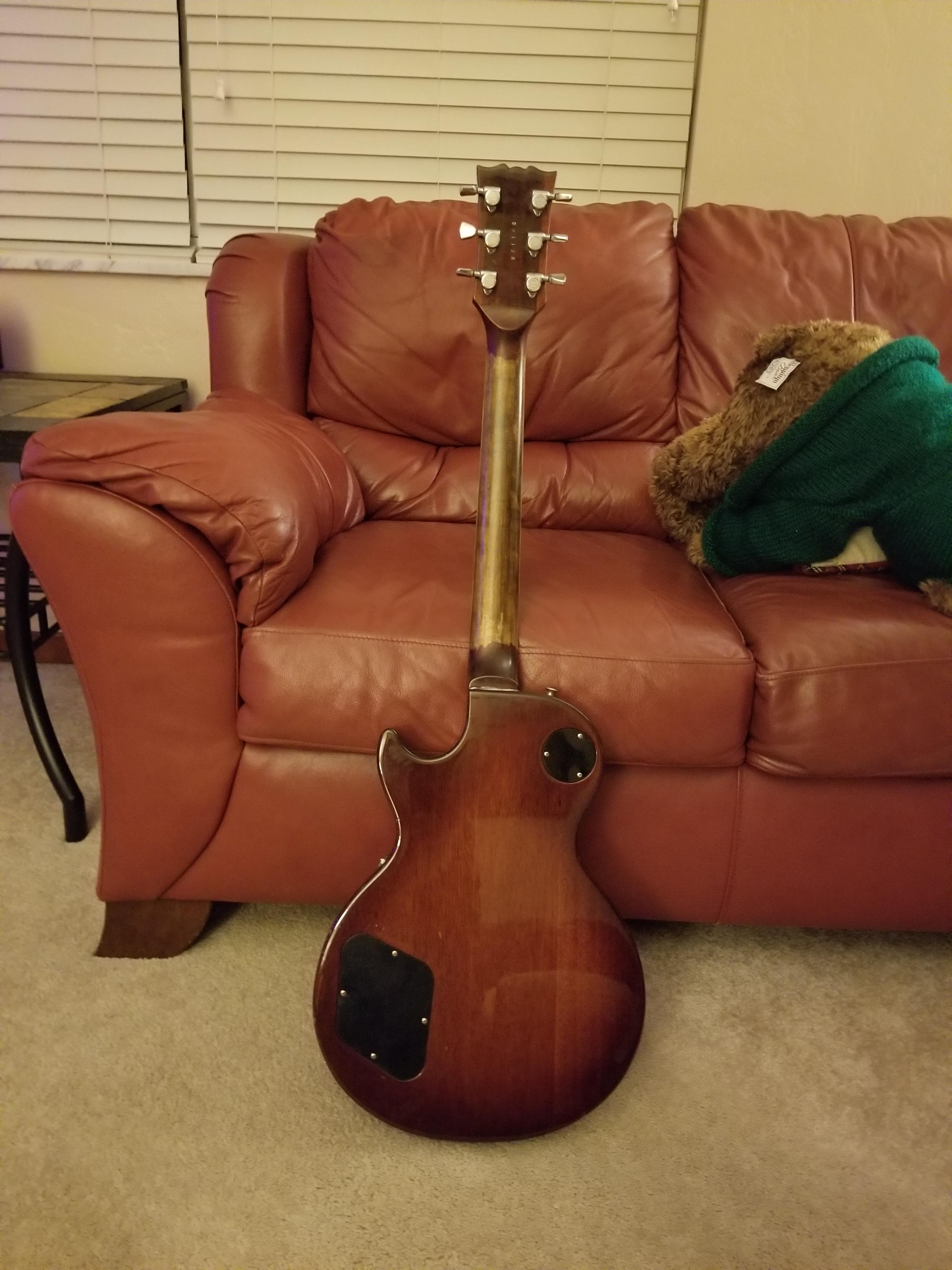 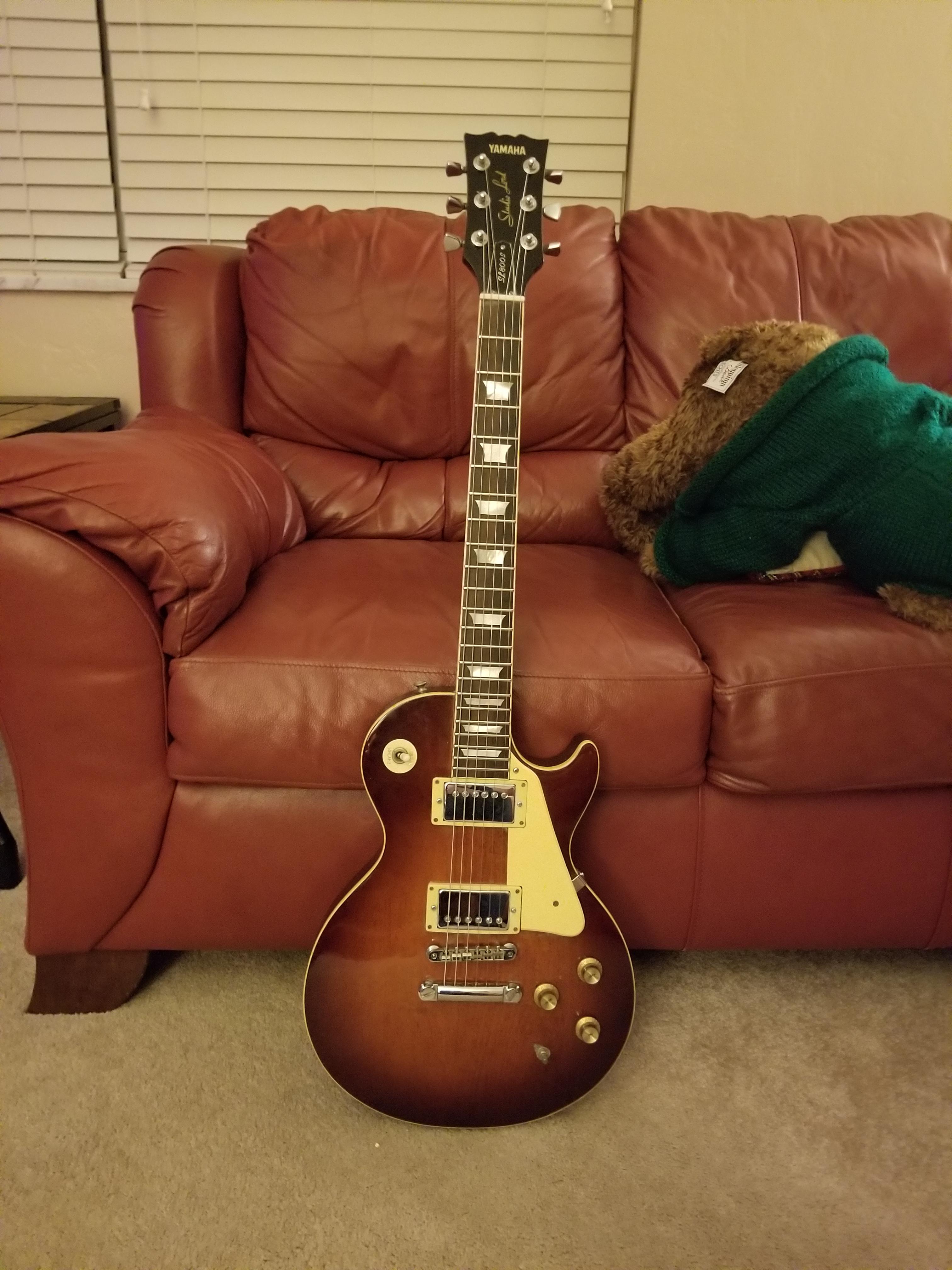 without learning the french polish, who would've known you could even try this, putting shellac and oil stain on the same rag, back and forth.

Adventure with a Guitar and French Polish

Re: what might not be clear in this case...

Bowing to the gods of laziness