Bill Houghton, Sebastopol, CA
A lot of my woodworking involves the ongoing refurbishment of our 1895 house, which, in turn, involves a lot of fitting of trim to existing trim, with the new trim frequently needing both miters and bevels cut. I prefer to take the angles directly off the old trim with an adjustable bevel and use that bevel to set the saw or strike the layout lines.

As a result, I have more than one bevel. I'm quite fond of the Stanley No. 18 bevel, with its locking thumbscrew at the tail of the stock, for its precision and firm lockup. But it takes two hands to set it, sometimes awkward when I'm working off a ladder, so I also have a couple of Stanley No. 25 bevels, with the lever nut (some pictures below, if you're unfamiliar with these). With this bevel, I can use four fingers, two on each "leg," to push the bevel against the spot to which I'm fitting the trim, and the leftover finger to push the lever tight (I thought I'd discovered this myself, only to find the 1914 catalog stating, "These Bevels are so constructed that the bevel blade can be firmly secured by moving the lever with the thumb of the hand which grasps the handle, thus leaving free the other hand of the workman."). Here are a couple of examples:

All Stanley No. 25 bevels are not alike, though. Older bevels have a superior clamping mechanism (I'm not sure of the exact date of changeover). Here you can see the backs of the bevels:

Notice that the older bevel on the left has a nut, while that on the right has a domed top like a carriage bolt. Here they are disassembled, first the older one:

then the newer one: 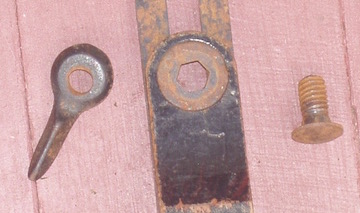 Why is the older clamping bolt better? The nut (which is a deformed-thread locking nut, so it holds its position) allows for infinite adjustment, so you can get the locking lever within the body of the tool when it's clamped tight. That way, the lever won't stick out and interfere with using the bevel for layout/saw adjustsment. The six-sided carriage bolt head on the newer style allows some adjustment, but not always perfectly so. Although it's not obvious in the photo, the lever sticks out just past the stock of the newer tool on the first photo, where the bevels are clamped shut.

If you frequent yard sales or eBay for your tools, and my paean to these tools has inspired you to get one, watch for the older style clamping mechanism. People don't generally realize that there's a difference, so you're unlikely to pay more for the better tool than for an inferior one*.

If you have, or acquire, a No. 25 with the newer style clamping bolt, and you're having trouble getting it to clamp with the lever inside the stock, try cutting a shim washer to fit under the clamping nut from thin sheet metal (soda/beer cans would make good material, though not the most aesthetically pleasing).

A digression: Stanley's Sweetheart era tools carry a great deal of mystique among many folks, and it's certainly true that the bench planes of that era have some of the best frogs, and the planes in general have a high degree of fit and finish. So it startled me, when I got the newer bevel above home from the Habitat ReStore where I paid $1 to get it, to find the Sweetheart logo on the tool. It's clearly not a top of the line tool: the stock's not rosewood, but some dark-painted mystery wood (the bits peeking through look like cherry, or maybe apple), the base of the stock lacks the riveted brass binding to be found on other No. 25s of many eras, and the top of the stock, instead of having brass binding, has washers front and back, one cut to accept the carriage head of the clamping bolt, the other just a thin washer. Oh, and the slot on the blade is much wider than on the older tool, leading to some slop in use.

This was clearly an entry-level, apprentice, homeowner, mechanic-with-no-money-to-spare tool. I couldn't find its match in the catalogs I looked in, so I don't know where Stanley marketed the tool. But it reminds me that mystique is often overblown.
-----------
*Now, if my name were Christopher, and my last name started with "S," this post might lead to a severe run-up in prices on the older style bevels...