Bill Tindall, E.Tn.
I occasionally cut trees for friends. Requirements are that both feet remain on the ground when the saw is cutting and nothing is in the target zone that won't grow back

Someone planted a full sized holly 3' from the house and never trimmed it to be the shrub it was intended to be. When it eclipsed the basement, 2 floors and the roof it was time to go.

It was not a desirable tree for lumber for it had numerous branches. But it was on the ground, there were a few clear sections and for stringing and inlay big pieces are not required. for example:

Holly dries easily but it is prone to growing mold which makes it blue or black and if it dries too slow there is something Wengert refers to as chemical stain that makes it gray. Ideally holly is cut in winter and dried cold to prevent mold from invading. This holly was oozing sap that mold was sure to favor.

The wood was free and an experiment was in order. The pieces were too small to bother the saw mill so I whacked them on the band saw. The goal is to get two orthogonal faces and then the billet can be cut to lumber. Screwing a straight edge on the log worked to get one face. Jointer, draw knife, and scrub plane got the other. 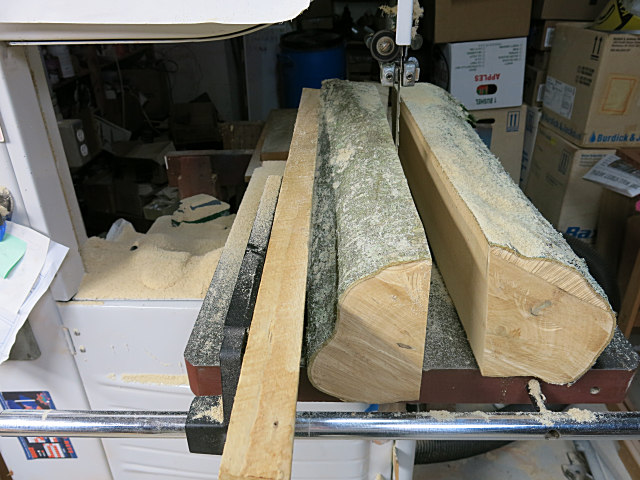 It made a mess.

We are in a hot dry spell. I coated the surfaces with fungicide and stacked the pieces in the sun. The combination of quick surface drying and fungicide might prevent mold from establishing; we shall see. So far the surface is mold-free.

I didn't have any Anchor Seal on hand. I will get end checking that could have been prevented.

thank you for compliment