Subject:
Lots of interesting thoughts in this thread
Response To:
The artist comments on furniture design *PIC* ()

Alan Young
Bill -your Cherry cabinet will no doubt store socks and keep them in line.
So would this

But I would without hesitation choose your "Sock Solution"

In my college days I was studying-Music-specifically the composing and arranging of Choral music-Although I did not pursue this as a vocation-I had five years of fairly intensive study with an outstanding composer and arranger who began his musical career in the big Band Era but spent his last 30 years teaching,conducting and writing choral music.. Listening to his mature works as a choral composer and arranger, I could see/hear the root of "Jazz" in his work but his music had a distinct flavor all it's own-Other than a specific Jazz arrangement he might have done here and there I would not have called him a "Jazz Arranger" because his tonal palette was distinct-His work had a sound that my ear picked up even though I was just learning the "Theory" in his harmonic structure. In my first year of Choral Arranging class we were assigned to arrange a Christmas Carol. I wrote an arrangement that I thought "Sounded" great. I brought it into his studio and he played two measures then stopped-looked at me and said-"I want to see you walk before you run". I know he saw that I was copying his sound-But he wanted to see that I knew the basics of part writing before I went off "creating"....I was bummed-but an as "Educator" his responsibility was to make sure I learned and could demonstrate the basic foundations of part writing before I took off with creativity. When I started into furniture making I tried to keep that lesson in mind-access to Good Ol' American Woodworker Magazines (Thanks Ellis) allowed me to learn solid techniques while opening my eyes to design possibilities.

Most recently I have been trying to refine my music stand designs. I'm getting closer to something I like- I am working on two more stands-they will not be a pair this time but will have the same basic joinery. One stand will use the brass adjustment mechanism I designed and used on several stands.

the other will utilize the new mechanism designed and built by my Dad. 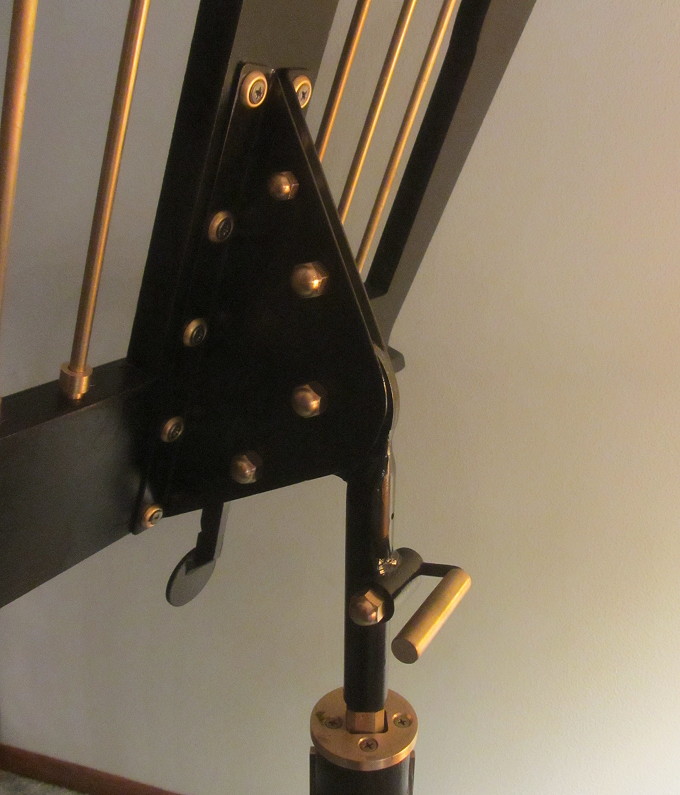 I really like the function of Dad's design but it is "artistically" just too big. If I was going for a full out Steam Punk design it would be absolutely perfect. Dad's method of design was always to efficiently solve a mechanical problem. I gave him only the request to make a better functioning design. I thought I would then adjust the design in future iterations for artistic purposes.. Dad's design was based on "Random sized" pieces he had lying around-It is really a prototype-I didn't have time to work with him on refining the "artistic look" before he passed. Now-this may or may not happen. I have 6 of the mechanisms Dad designed- and I can fabricate more of my own earlier design. So I can offer two designs for potential clients-Once the "Dad design" is used up I will need to redesign the jigs he made if I want to alter the artistic form factor.

As our family sorts through Dad's things we will be deciding who ends up with what-I am apparently the likely heir to a lovely Cherry High Boy that my mother had made or bought-when were were very very young...

It is similar though not exactly like this one:

The more I ponder "owning" this piece the more I question the reason why. It's design is beautiful and the workmanship is as well-Yet it's "function" seems to have little in common with my current and expected needs. I am asking if this piece will be worth the effort required to transport it from North Dakota to Michigan. Some would want it just for it's beauty-no matter how well it can be used for our "modern" storage needs. But practicality may win the day and over ride all other justifications for a lovely piece of furniture.

I seem to be rambling a bit now.... but the skills of design vs fabrication ie execution or building do sometimes seem to be separate but I think the better one gets at fabrication the better he should be at design-It is a matter of use- One- off work comes at a price and that currency fluctuates over time.

May I add this?

Lots of interesting thoughts in this thread
Great discussion

“Why seek the critique of others?”

Re: The 10 Books of Architecture FREE

Re: da Vinci & The 10 Books of Architecture

Yup, he sure did!

the second question is silly

Re: the second question is silly

Re: “Why seek the critique of others?”

I wish there was a means to collaborate

Re: I wish there was a means to collaborate